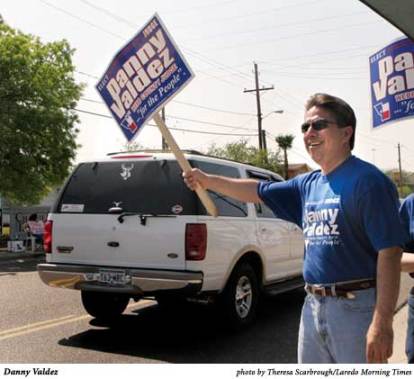 If Danny Valdez is committed to running for re-election, then why is he soiling his pants every day?

According to Facebook and Twitter, Tano Tijerina will make it official this Wednesday and throw his hat into the ring for County Judge.

Does this come as a suprise to ANYBODY?  No, Lizardistas, Tijerina nearly took then-one term County Judge Danny Valdez to the woodshed four years ago as a greenhorn.  Valdez barely survived the youthful Tijerina’s momentum, and had that runoff been another month later, he might not have.

Well, now it’s four years later, and both Valdez and Tijerina have had an entire election cycle to ponder the inevitable rematch.

Tijerina appears to be ready to rumble.

Valdez, on the other hands, has been at the center of swirling rumors and street talk — some of which is so far-flung and ridiculous we can only conclude that our honorable county judge has either lost his mind or control over his bodily functions.  Maybe both!

RUMOR NUMBER ONE:  Several weeks ago, Valdez allegedly approached County Court at Law judges Ben Morales and Chuy Garza about “pooling their resources” to create a Political Action Committee, where all three could share financial resources, support organizations and campaign efforts.  According to the rumor mill, both judges told Valdez to take a hike.

WHAT DOES THIS MEAN?  Maybe Valdez run off a lot of supporters and donors over the past four years (and pissed a lot of them off)  and is trying to glom onto the well-funded and organized campaigns of others.

RUMOR NUMBER TWO:  Late last week, after word got out about Tijerina’s planned announcement, Valdez allegedly began “floating” the idea of moving Webb County elections to November!  After all, the City of Laredo moved its elections to November to save the taxpayers money, why couldn’t the County? Apparently, three decades in government office hasn’t quite rubbed off on poor Danny, because the March election for County Judge is a DEMOCRATIC PRIMARY, with the dates set by the State of Texas.  The winner of the Democratic Primary, must then run in the general election in November.  Though most Webb County offices are never challenged by Republicans (ahem, remember Louis Bruni vs. Judith Zaffirini?), statewide and congressional elections almost ALWAYS are, which is why we still have contested elections in November.

Poor Danny “floated and idea,” which must have come to him during a sweat-soaked restless night.   WHAT DOES THIS MEAN?  Valdez is looking for a way to buy time, even if it makes him look like a fool.

RUMOR NUMBER THREE:  Valdez skips the primary and runs in November as an Independent.  Street rumblings also put him in an alliance of sorts with possible Mayoral candidate Jerry Garza  in this scenario.  Sure, he could do that (not so sure about the Garza part).  But obviously, Danny likes to talk before he thinks.  Studies have shown that Webb County voters tend to vote straight party tickets in November — more than half of the 2008 vote was cast that way.  That would kick an independent Danny Valdez’s butt before the early vote even came in.  Not just by Democratic straight ticket voters, but also by Republicans.  How stupid would THAT be, Judge?

Then there’s the pesky LAW about having to get a petition signed by people who didn’t vote in the primary in order to get onto the ballot as an independent. Then the time and cost of certifying those signatures, and explaining why the County should pay for it — just because Judge Valdez wet his pants.  WHAT DOES THIS MEAN?  Valdez and his supporters are grasping at straws.

RUMOR NUMBER FOUR:  Mayor Raul Salinas runs against Tijerina instead of Valdez.  Valdez uses his resources and grassroots organization (not to mention County employees he bullies into helping him) to support Salinas in hopes of either beating Tijerina or making him spend his campaign funds.  Valdez then runs in November as an independent against the winner of the Democratic primary.

Well, even though Mayor “Chubby Cheeks” has insisted he’s going to run for County Treasurer, there’s no way he’d oppose his compadre, Danny Valdez, in the fall.  And then there’s the same issue with the “running as an independent thing.”   And then there’s the notion that Tijerina would be drained of campaign cash.

WHAT DOES THIS MEAN?  Judge Valdez hasn’t yet come down to earth from his Las Vegas honeymoon.  Can anyone say “Hangover Part 5?”

Here at the Lizard, we promise to bring you the truth, no matter how stupid it is.  Well, we know that it is ABSOLUTELY TRUE that these are among the crazy rumors that are flying around about the 2014 County Judge race.  We also promise you that this is PRETTY DAMNED STUPID!

We are certain that stupid season has only just begun!  Stay tuned, Lizardistas!