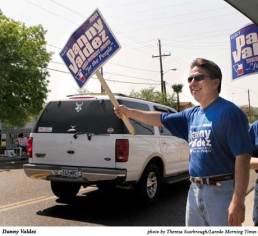 According to a couple of attendees, the doors were closed for three reasons:  1) to prevent the rest of the patrons of the Northside eatery to see how few people turned out to support Valdez;  2) to keep the few who were roped into showing up from running out.and 3) most importantly to protect the anonymity of those who HAD to be there.

Fortunately, LMT reporter Aldo Amato was among the few who gained entry to the cozy little affair and reported these comments from Judge Chorro:

“It’s been a roller coaster ride,” Valdez said. “But I’ve definitely enjoyed accomplishing the things I set out to do. To say it’s been extremely fulfilling would be an understatement.”

Some of the major issues Valdez said he would like to tackle if he is reelected are the water quality problems in El Cenizo and Rio Bravo. Both communities were under a boil water alert for three weeks in August after traces of E. coli were discovered in water samples.

“This county is so large and there are still so many things I would like to help fix,” he said. “But water
quality is my top priority if I am reelected. We’ve rectified the issues, but we want to make sure the plant is  working from top to bottom and prevent something like that from happening again.”

Somehow, Lizardistas, when I read Valdez’s comments on his accomplishments as County Judge  I’m reminded of George W. Bush sitting on the deck of the aircraft carrier declaring “Mission Accomplished” just a few months into the Iraq war. Right before the chorro hit the fan.

I’m sure the people of El Cenizo and Rio Bravo agree.

Rumblings and mumblings all over town (and Facebook no less) are that longtime Webb County activist, former County Judge and former Councilman Louis H. Bruni  (the INSULTan of Bruni) is going to make a run for County Judge against Valdez and Tano Tijerina.

Here’s the FB post, edited of course.  Only you can imagine what it said prior to the edit job.

October 4 · Edited
The voters have made a call ” LOUIS H BRUNI ” for Werbb County Judge , “

Is he SERIOUS?  Poor Louie may have become the biggest political punching bag in Webb County history, finishing last in his last three elections. He even ran as a Republican once to postpone the beating as long as he could. One can only hope he has a moment of clarity and allows this important campaign to proceed without the Loony Tunes antics he’s so famous for.  (Besides, Valdez has already set the bar for crazy statements — see above!)

BUT, the word from the inside is that Bruni has already contracted an out of town political consultant to help make his dream come true.

Stay tuned Lizardistas.  This only promises to get stupider and stupider!

One thought on “County Judge Race Is Set … or is it?”